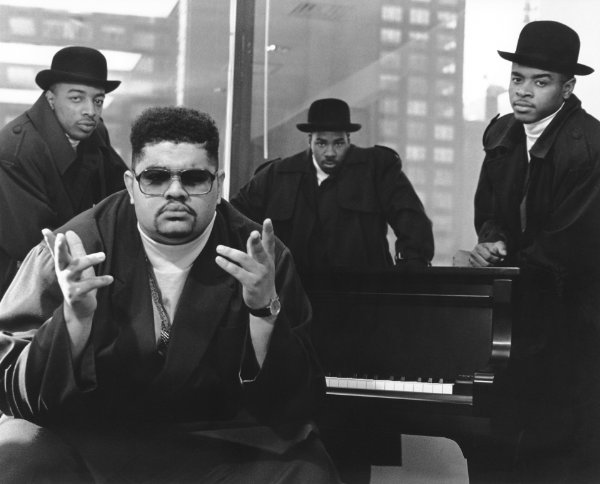 Rap pioneer Heavy D passed away on November 8, and SPIN likes to remember him more that just hip-hop's ever-suave nice-guy and the ladies man behind megahits like "Nuttin' But Love." The 44-year-old rapper had a wide-reaching impact on hip-hop, and his presence cut a smooth line from Marley Marl's raw sample science through Puff Daddy's pop reign — and, in between, stopped everywhere from Jamaica to Neverland Ranch. Take a look back at 15 hits, detours, and other songs that owe him gratitude to grasp the full impact of Waterbed Hev.

THE FIVE MOST IMPORTANT TRACKS

1. Heavy D & The Boyz - "The Overweight Lover's in the House" (1987)
Over a vintage Marley Marl smacker, the second single off Heavy D's debut established Hev as one of the most formidable rhymers of hip-hop's golden era: A silky-soft playboy whispering in a girl's ear by the fireplace… but not so soft that he won't totally stomp her boyfriend. Alongside Big Daddy Kane, Heavy helped establish the smooth badass: Drake should thank him sooner than later.

3. Heavy D & The Boyz - "Now That We Found Love" ft. Aaron Hall (1991)
Hip-house had played itself out years earlier and new jack swing was wearing itself thin. But Heavy and Teddy Riley still found the missing link between Yo! MTV Raps and Club MTV, due in no short part to Hev's manic fast-raps on this locomotive of a track. Ultimately it garnered Heavy D his highest charting song, landing at No. 11 on Billboard.

4. Michael Jackson - "Jam" (1992)
"Jam" was Michael Jackson's very first acknowledgment that rap was changing the pop universe that he had dominated for a decade. Jacko naturally requested Heavy, one of hip-hop's greatest pop ambassadors, for a tight four bars. Jackson played Heavy a song and, as Hev told Shade 45, "One of the hardest things I ever had to do was tell Michael Jackson 'that’s kinda wack.' Heavy recommended maybe hooking up Teddy Riley instead… and HIStory was made.

5. Heavy D & The Boyz- "Nuttin' But Love" (1994)
The story goes that Russell Simmons wouldn't sign Heavy D to Def Jam way back when due to his plus-size frame, lazy eye, and smoothed-out club jams. Of course, the Hevster not only had the last laugh by never turning into a babbling capitalist shill or self-help yogi goofball, he actually became a crossover sex symbol with a cheeky hit video (produced by Russell Simmons protégé Brett Ratner!) full of supermodels that he never had to marry or indulge with a train wreck reality show. Produced by boisterous New York City DJ Kid Capri, "Nuttin' " was an undulating, pop-funk marvel, and the video remains a historic hoot — starring Chris Tucker (sporting an orange touring cap, Hawaiian shirt, and pearls!), plus the aforementioned bevy of "yeah, whateva" catwalkers, including Cynthia Bailey from Real Housewives of Atlanta and Rebecca Gayheart, a.k.a., the "Noxema Girl," a.k.a. Dylan's wife on Beverly Hills 90210, a.k.a., squeeze of director Ratner. Later, Ratner was brought on to direct Tucker's Money Talks, due to their meeting on the "Nuttin' But Love" set. Hey, don't blame, Hev.

Read More
Posted by Kaz at 6:59 PM No comments:

What is Keepers of the Art

What is Keepers of the Art from Blue Green on Vimeo.

Check out what Keepers of the Art does for the Akron, Ohio community. The Keeper's consistently bring high quality shows at an affordable price.